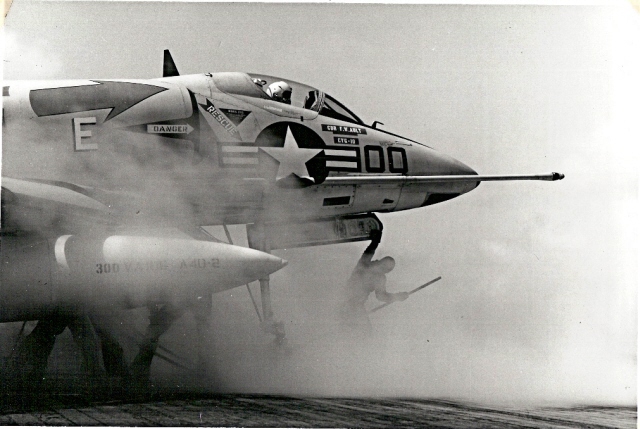 Steam Bath..VA-106 Gladiators A4D Skyhawk being led to the cat.


Click links below for great pictures. If you put your cursor over the picture when it displays, a zoom icon will display on the lower right of the picture. Use Browser Back icon to return.

LCDR Norman Youngblood (OIC) and &quotJaws of the Tiger"

RF8 on cat..ready to rock and roll


After a faulty starboard cat launch aboard the U.S.S. Shangri La, Commander J. E. Davis from VF-62, fights to escape his F8 after plunging into the sea. Owing to a failure in the linkage between the aircraft and the catapult, the fighter veered to the starboard side. The Crusader's wheel rolled over towards the gun mounting and plunged tail-first into the sea. The pilot escaped with a cut elbow.

A narrow escape from a sinking F8*


Shot by VFP-62's RF-8, This picture, although scanned with low resolution for this site, illustrates the high quality photography possible by the RF-8.

The following pictures were contributed by Frank Buesing

Air-to-air refueling is always tense but more so in this case. Note the attitude of the RF-8 while refueling from the much slower prop-driven (Korean War vintage) AD.

RF-8 refueling from an AD *


Gone! RF-8 launching from the angle deck of the U.S.S. Forrestal. Note the wing of the crusader is canted up for more lift. This is a unique design of this plane. An A4 Skyhawk is being prepared for launch on the left forward cat. Note the blast deflector behind the jet to protect the flight deck crews.