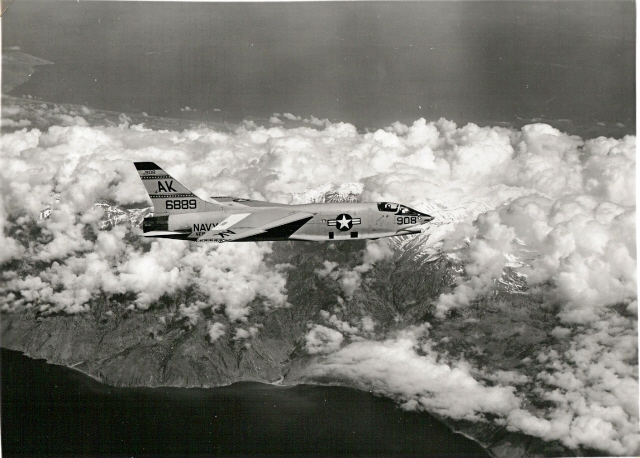 
Return To "We Love Crusaders" Page 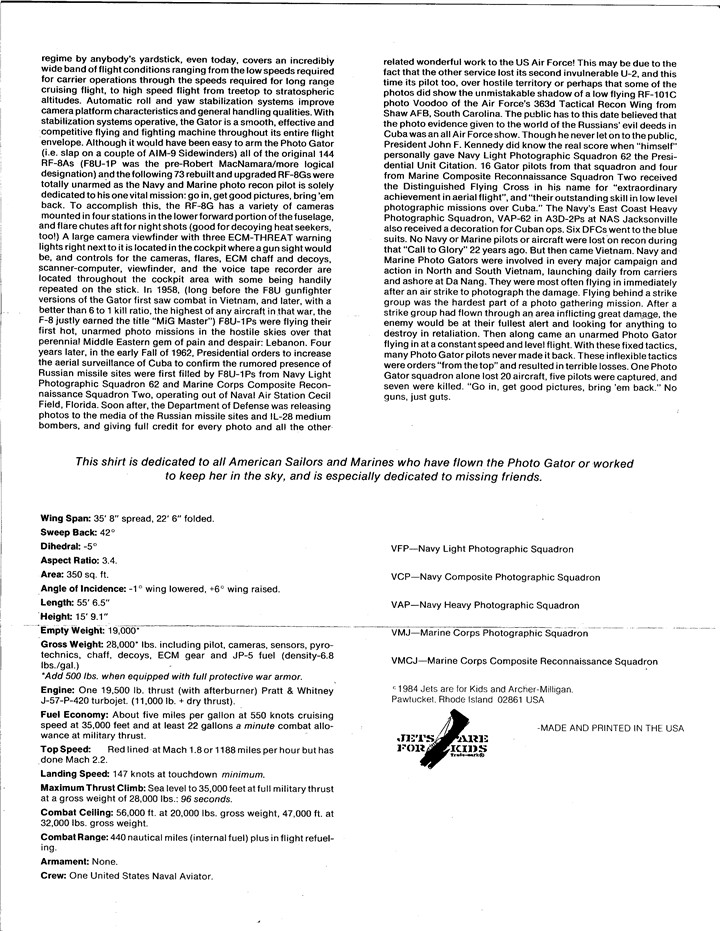 The RF-8 was the photo version of the F-8 Crusader, a single seat supersonic (mach 1.5 approx. 1100 mph) jet, with no armament. It had four camera bays, aft of the pilot, two on each side of the plane. In addition, it had a nose camera mounted forward for attack pictures. A wide variety of cameras were available for intallation in the camera bays, dependent on the mission. The RF-8 could take pictures from 50,000 feet to tree-top level, day or night. For night photography, the RF-8 would be armed with flares, stored aft of the pilot.
Each camera bay had a window on the bottom surface of the plane, for shooting vertical pictures, and a side window for shooting oblique pictures out to the left and right of the plane. Some cameras were mounted so that they could be rotated by the pilot from vertical to various oblique angles. The air to air pictures taken by the RF-8 on this Website were shot through the side windows. These windows required constant cleaning due to the notorious nature of the Crusader to have hydraulic fluid leaks that would stream across the windows in flight.
The cameras were controlled by sophisticated electronic equipment that enabled the pilot to shoot pictures either in manual or automatic mode. In manual mode, the pilot would have to dial in his speed and altitude on a master control unit. In automatic mode, a scanner with grid lines would calculate the control for the cameras. Because the plane would be traveling (sometimes at high speed) over the target, the film had to be moved and the frequency of exposures adjusted to compensate for the movement. These adjustments were all electronically controlled. 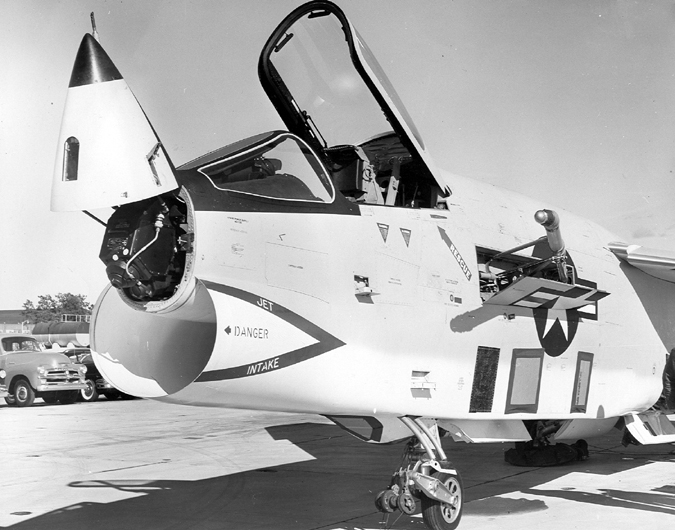 The pilot had a viewfinder in front of him to keep the target lined up for the cameras. The above photo shows the viewfinder with the nose cone opened. Also the forward camera bay under the air scoop and the side windows for oblique photos. Note: The left panel is not a camera bay but two side camera bays are to the right. The air-to-air refueling probe is extended for inspection.

Although the process was largely automated, the skill of the pilot determined the success of the mission. Often when over hostile territory (Cuba and Vietnam), the pilot was a very busy man! RF-8s would be escorted by fighters for their protection.
Naval Photographers (photomates) were stationed on the flight deck for each launch and recovery and responsible for installing/removing cameras and film for the mission. There were also a camera repairman and a photo electronics technician on board to maintain the cameras and electronic equipment. When a mission was completed, the film would be removed from the plane's cameras and sent to the ship's photo lab for processing. After processing, the film would be sent to the photo intelligence department for analysis.
Crusaders were operational until the late eighties. The RF-8 remained longer than the F-8 in the fleet and was discontinued in 1986. An RF-8 is on display at the Air and Space Museum at Dulles Airport.


In 1957, before the F8U-1P became fleet operational I was part of the team at the Naval Air Test Center, Patuxent River, Maryland which conducted the Board of Inspection and Survey trials on the F8U-1P.

It was this aircraft (sorry, I don't recall the Bureau Number of it) which was flown by Maj. John Glenn in "Project Bullet." Maj. Glenn was, at that time assigned at NATC as a test pilot.

After that record setting flight was completed, the aircraft was returned to the test team to continue the BIS Trials.

Webmaster's note:
We have a database of all of the F8U-1Ps built, which is linked from our "We Love Crusaders" Page. In that database, F8U-1P Bureau No. 144608 is the plane used by John Glenn to make his trans-USA record breaking flight. It was also "borrowed" from NADC in October 1962 by VFP-62 to fly missions over Cuba during the Cuban missile crisis.


Return To "We Love Crusaders" Page